The Volcanoes national park lies along the Virunga Mountains, with 8 ancient volcanoes, which are shared by Rwanda, Uganda, and the Democratic Republic of Congo.

Just a short two-hour drive from Rwanda’s capital of Kigali, the park is a central location for exploring some distinctly Rwandan experiences. While a visit to the mountain gorillas is often at the top of visitors’ list, the dramatic landscape also offers thrilling hiking and visits to the fascinating golden monkeys.

Volcanoes national park is also one of Rwanda’s conservation epicenters, where many non-profit organizations base their operations.

Visitors can pay homage to the legendary scientist and gorilla advocate Dian Fossey with a hike to her tomb or a visit to the Dian Fosse Gorilla Fund which continues her legacy of research and advocacy to this day.

Near the volcanoes national park, the bustling and vibrant markets of Musanze are a place to immerse yourself into everyday Rwandan culture. Go deep into the earth with Musanze’s caves – one of the area’s newest attractions.

Rated one of the best experiences ever, Gorilla trekking in Rwanda takes place in the Volcanoes national park.

Your group will also have a pair of trackers who will have been sent out in the early morning (prior to your arrival in the park) to find the location of your specific gorilla family and to assess where they may be headed.

Trackers communicate the gorilla’s movements to the guide so that he can decide on the best approach to meet the gorilla family. The time taken during your hike to the mountain gorillas depends on how far the gorillas have moved.

It may take as little as 30 minutes to find your gorilla family and as long as five to seven hours. The forest is verdant, humid, and somehow light and there are no discernible trekking paths.

The terrain is full of hills and steep volcano slopes where you will be required to pull yourself up steep grades by grasping onto branches, roots, bushes, and more.

Follow the lead of the guide as to the best path and form to take. It is also advisable that you carry with you some energy-giving snacks and bottled mineral water to quench your thirst and give you more energy.

Golden monkey trekking takes place in the Volcanoes national park and starts at the same time which is 7:00 am just like gorillas.

These rare species are also listed as endangered – and Volcanoes national park currently has two habituated golden monkeys’ troops that are available for visiting by tourists in the park, both of which make about 80 members.

Golden monkeys in Rwanda live in the bamboo vegetation towards the base of the volcanoes and habituation has helped them to overcome their initial shyness to accept their daily visit by researchers and tourists. They are very active creatures, and jump from tree to tree which is really interesting and a little difficult to photograph!

The mountain Bisoke adventure is one of the most memorable activities in Rwanda. The top of this Volcano has a spectacular crater lake.

It is simply a 6 hours hike including the 2 hours descending down to the starting point. Experienced hikers can get to the top of this mountain in a matter of 3 hours or even less and return to the base in about an hour.

On the day of hiking, hikers converge at the park headquarters at Kinigi at 7:00 am to attend a briefing and be assigned a park ranger.

The park rangers are usually natives of the Volcanoes national park vicinity and thus very knowledgeable about the mountain adventures. At 8:00 am the adventure begins.

Your tour guide will transfer you to the starting point. You will be assigned porters to carry your baggage. You will be provided the hiking gear.

Trekking to the Dian Fossey Tomb is one of the most sought-after safari activities carried out while visiting Volcanoes national park for a gorilla trek.

The trekking involves a 30 minutes drive from the park headquarters to the trailhead to access the Karisoke research center where visitors walk for 10 minutes to the park boundary. The walk from the park boundary to the research center where Dian’s grave takes about an hour to 1 hour and a half hours and affords good views of forest hogs, forest elephants, a variety of primates, and bird species.

The hike involves moving through the forests and hiking up the slopes and therefore requires some relative degree of fitness and patience.

At the site, you will find the house from where Dian Fossey was mysteriously murdered in 1985 but the more peaceful is the place where she was buried just next to her favorite gorilla friend, Digit, and about 20 other mountain gorillas either killed by poachers or suffered death for other reasons.

Getting to Volcanoes National Park

Volcanoes National Park is located in a small village called Musanze previously well-known as Ruhengeri, which is very accessible by public transport from Gisenyi or Kigali or from the airport. The drive to Volcanoes national park is 2 hrs and hence one can do gorilla tracking on the same day and drive back to Kigali after the trek.

You will be required to arrive at the headquarters of ORTPN in Kinigi, at the park entrance, by 7:00 am, therefore, if you hope to trek gorillas for one day, you have to wake up very early for your journey so that you are on time.

However, there isn’t any public transport from Musanze to the headquarters of the park at Kinigi. 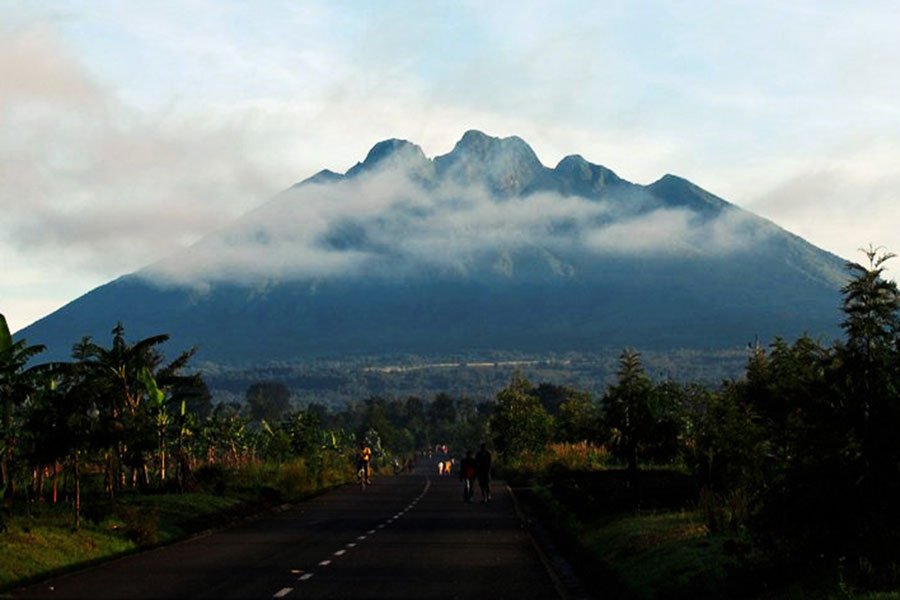 The mountain gorillas, one of the world’s most endangered ape, is found only in small portions of protected afro Montane forests in northwest Rwanda, southwest Uganda, and eastern DRC. The mountain gorilla is one of many species unique to these forests.

The forests are also home to many wonderful birds, primates, large mammals, reptiles, insects, and plants and also ensure continued water and medical plant resources for the local communities.

Hidden high among the forested volcanoes of East Africa, the mountain gorilla was unknown to science until 1902, when two were first encountered by a German explorer and promptly killed. It set the tone for the relationship.

Not long after the species’ greatest champion, the American zoologist Dian Fossey was killed in Rwanda in 1985-there were fewer than 300 of the giant primates left in the wild.

Today nearly half of the world’s remaining mountain gorillas live in the Virunga Mountains of central Africa, at the intersection of Uganda, Rwanda, and the Democratic Republic of the Congo. The volcanic slopes here are lush with tropical forests and diverse mammal, bird, and reptile species but they are also at the heart of a region in crisis.

While planning your Rwanda safari, you should not miss out on the magnificent opportunity to visit Rwanda’s Volcanoes National Park – home to the six Virunga Volcanoes and the world-famous mountain gorillas.

Dian Fossey’s gravesite is at Karisoke, a site that she herself had constructed for her deceased gorilla friends.

She was buried in the gorilla graveyard next to Digit, and near many gorillas killed by poachers. Memorial services were also held in New York, Washington, and California.

Dian Fossey was an American primatologist and anthropologist who committed her life to the conservation of the Mountain Gorilla by conducting an 18-year comprehensive study about the fateful ape in the early 1960s.

The Musanze Caves, in Volcanoes national park, are one place you should visit. They are two kilometers long underneath and they were recently unveiled to be visited by tourists in 2013 by the Rwanda Development Board together with the Rwanda Defense Forces.

The caves can be sited north of the country in Musanze District, the site has had a major facelift with the establishment of tourist walkways, trails, and stairs that take you to the dark interior of the caves that illustrates a picture of a house with several rooms and corridors. The floor is paved and there are some stairs to ease movement.

Be genuinely welcomed by the community as a special visitor while they proudly present to you aspects of their traditions and beliefs. The only way to get to know people is by getting close and interacting with local people, taking part in their daily activities, and most of all with them.