Built in Rwanda’s capital at a site where some 250,000 victims of Rwanda’s 1994 genocide lie buried, the Kigali Genocide Memorial is a place of remembrance and learning which hosts tens of thousands of visitors each year, from Rwandan school students to international celebrities and politicians.

In Trip-advisor’s 2015 ‘Travellers Choice’ awards, it is one of the top ten landmarks to visit in Africa.

Established by the Aegis Trust in 2004 at the request of the Rwandan authorities, the Memorial continues to be run by Aegis under contract to CNLG – Rwanda’s National Commission for the Fight against Genocide. Comprising exhibitions, memorial gardens, educational facilities, and the Genocide Archive of Rwanda, the Memorial plays a vital role within Rwandan national, social and cultural identity as a place of remembrance for survivors and education, both for the young and for wider Rwandan society. It is also a site of learning highly relevant to the international community, as policymakers strive to improve response to mass atrocities and the effectiveness of systems for prevention.

The remains of the people here were brought from all over the capital after they had been left in the street or thrown in the river. They are buried together in lots of 100,000. The memorial was opened in 1999.

The center documents the genocide, but it also describes the history of Rwanda that preceded the event. Comparisons are also made with similar sites in Germany, Japan, Cambodia, and Bosnia. Unlike the ex-concentration camps, at Auschwitz Birkenau, the Rwanda site includes human remains and the tools and weapons used in their destruction. 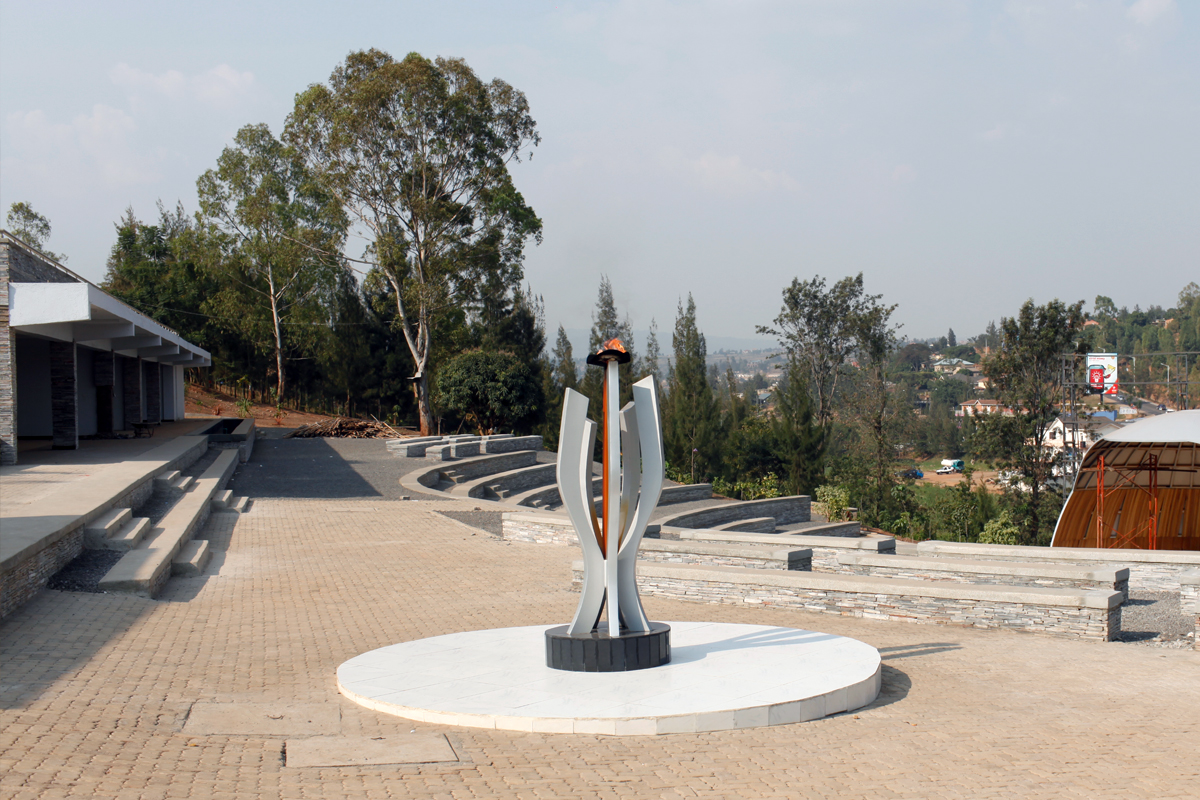 On the Upstairs floor, the center includes three permanent exhibitions, the largest of which documents the genocide in 1994, helping to set in context Rwanda’s nightmare in a historical context. There is a children’s memorial, with Life-sized photos, accompanied by intimate details about their favorite toys, their last words and the manner in which they were killed.

There is also an exhibition on the history of genocidal violence around the world. The Education Center, Memorial Gardens, and National Documentation Center of the Genocide contribute to a meaningful tribute to those who perished and form a powerful educational tool for the next generation.

The Kigali Memorial Center is international. It deals with a topic of international importance, with far-reaching significance, and is designed to engage and challenge an international visitor base. The informative audio tour includes background on the divisive colonial experience in Rwanda and as the visit progresses, the exhibits become steadily more powerful, as you are confronted with the crimes that took place here and moving video testimony from survivors.

The commission from the Kigali City Council was to develop the memorial site, where up to 250,000 genocide victims were buried in mass graves, into a memorial centre and permanent exhibition for the benefit of survivors and young people. The Aegis Trust manages the Kigali Genocide Memorial and is developing it with a school of education.

Other Genocide Memorial Centers to visit

Murambi Genocide Memorial Site is located in Murambi village, Remera Cell, Gasaka sector, Nyamagabe district in the Southern Province; 126 km from Kigali City and 3.5 km from Nyamagabe town. Before the genocide, Murambi was located in the Nyamagabe commune in Gikongokoro prefecture which was formed after merging the former communes of bufundu, Nyaruguru, Bunyambiriri and Buyenzi in 1963.

It has been divided into the following major sections:

The church of Ntarama was converted into a genocide memorial on 14th April 1995 and is dedicated to the 5,000 people who lost their lives there. One of Rwanda’s six National Genocide Memorial Sites, Ntarama contains human remains, clothing, and artifacts belonging to those who were killed at the church, which remain on display at all times.

Most of the Tutsi population mostly living north and south of the country were forcibly deported to dwell into the barren and tsetse fly-infected area of Nyamata. Once the area was operated and become habitable by these occupants Tutsi in 1980, a church was set up for worship. In 1994, this place once regarded holy and sacred become desecrated; a place of sacrifice of the Tutsi faithful members by their Rwandan counterparts where over forty-five thousand people who had sought refuge were all brutally massacred in one day. After negotiations between the Catholic Church and the Rwandan government, the church was converted into a memorial site, representing other churches in which the victims of the genocide against the Tutsi were slaughtered.

Also known as the memorial of resistance, Bisesero Genocide memorial site is known so much by Rwandans for its resistance during the 1994 genocide against the Tutsis. Between the month of May and June, 1994 is when the Interahamwe came to carry out the massacres that sent over 40,000 Tutsis dead.

Currently, the Bisesero Genocide memorial which construction started in 1997 has three buildings full of human bones and currently ongoing construction of a graveyard where the 50,000-60,000 bodies will be buried.