Dian Fossey was an American zoologist, primatologist, and anthropologist and remains the most widely-known researcher on the endangered mountain gorilla, of which about 800 are believed to be still alive in the wild. She was found murdered & in the bedroom of her cabin in the Virunga Mountains in 1985 by the poachers who hunted down the gorillas.

Dian Fossey’s tomb/ grave is just next to the gorillas which had also been killed by the poachers. Memorial services after her death were held in Washington D.C., New York, and California. The cabins in which she and her staff lived do not exist anymore except for a few bare foundations, overgrown with weeds.

The famous ‘Gorillas in the Mist’ a 1988 American drama film directed by Michael Apted and starring Sigourney Weaver tells the true story of Dian Fossey in Rwanda and her 18 years of study with the mountain gorillas. The film received generally positive reviews from critics and was nominated for the Oscar Awards.

Her favorite Gorilla called Digit was buried next to her. The Diane Fossey Gravesite is more like a remote pilgrimage site with an extremely scenic hike. 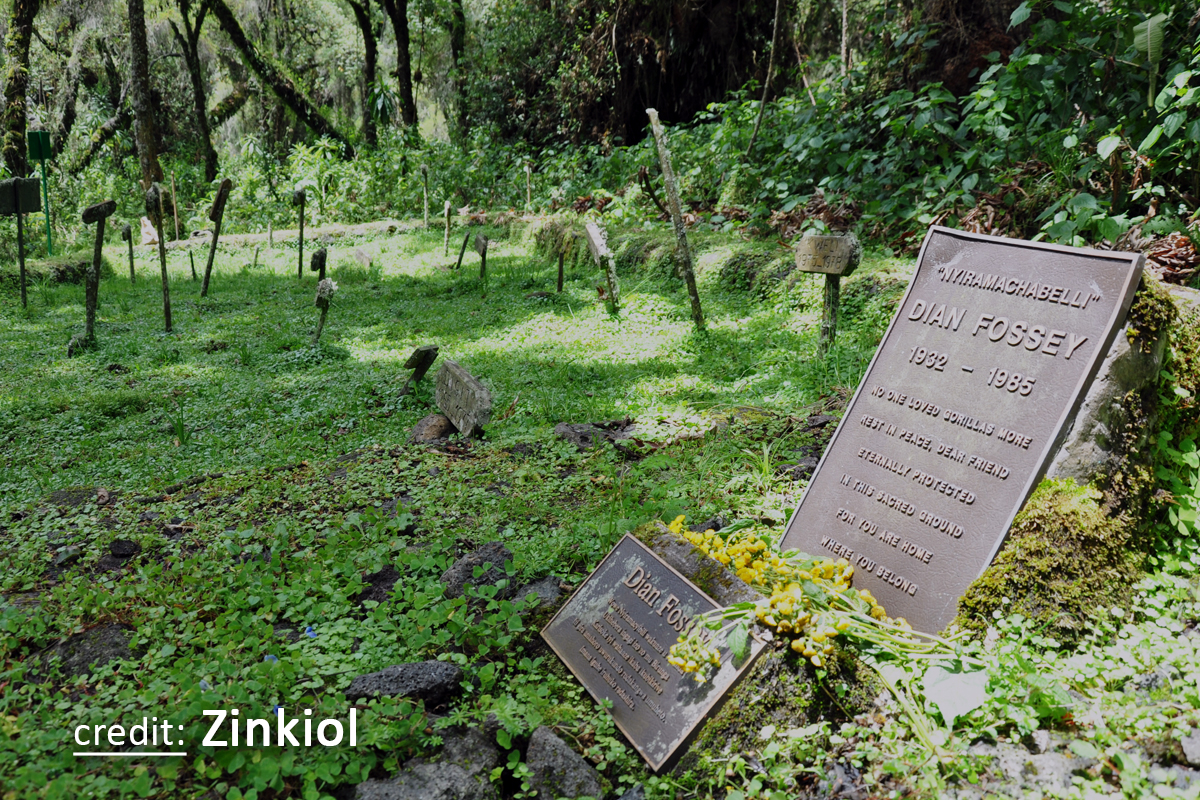 Trekking to Dian Fossey’s original scientific base at Karisoke starts from Volcanoes national park headquarters. The Karisoke research center was established in 1967 by Dian Fossey to study the mountain gorillas located in Ruhengeri.

The Karisoke research center is in a saddle area between Mount Visoke and Mount karisimbi and that’s how its name was got. The center was abandoned during the unrest in the 1990s but all that remains today is a grave site where all Dian Fossey’s favorite gorillas were buried.

It takes about 3 to 4 hours to trek to the Karisoke research camp which is at an altitude of 3000m and takes you through some of the most beautiful stretches of Hagenia – Hypericum forest in the Volcanoes National Park.

The trek costs about USD $ 75 per person for the foreigners and includes the guide fee. The trek starts early morning at 7:00 am from the Volcanoes national park headquarters in Kinigi where visitors will have to drive to the starting point of the trek. Porters are available for hire as well.