Kasubi Tombs is a UNESCO world Heritage site in Kampala, that acts as a cultural burial ground of the previous Kings of the Buganda Kingdom.

Its place acts as the burial ground for the previous four Kabakas, making it a very important religious center for the royal family, a place where the Kabaka and his representatives frequently carry out important rituals related to Ganda culture.

The Kasubi tombs site is considered to be one of the UNESCO world heritage sites among others which include the Bwindi & Rwenzori mountains in Uganda.

The Kasubi tombs hill is divided into three main areas: the main tomb area located at the western end of the site, an area containing buildings and graveyards located behind the tombs, and a large area on the eastern side of the site used primarily for agricultural purposes.

The entrance to the Kasubi tombs site is a beautifully built gatehouse called Bujjabukula. According to Ganda tradition, the guards who control access to the site hide behind a see-through woven reed screen, to keep watch round the clock in order to control access.

This gatehouse was constructed using wooden columns supporting a thatched roof, with walls made of woven reeds. The Bujjabukula leads to a small courtyard that contains a circular house in which the royal drums are kept, the Ndoga-Obukaba.

From this forecourt, one enters the main courtyard (Olugya), enclosed by a reed fence and several houses built for the widows of the Kabakas and for other ritual purposes.

The entrance into this courtyard is a striking experience as one immediately faces the main tomb building known as Muzibu-Azaala-Mpanga, which is the architectural masterpiece of this ensemble. 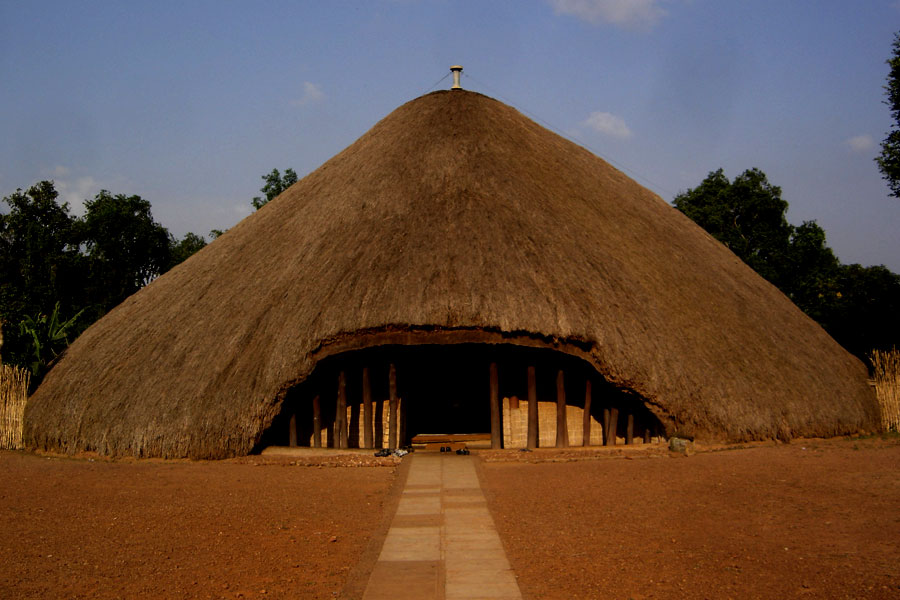 The Muzibu-Azaala-Mpanga is circular in plan and has a dome-like shape.

The main building that can be seen today was rebuilt in 1882 by Kabaka Mutesa I. The first palace originally built by Mutesa I’s father, Kabaka Suuna II in 1820 does not exist anymore.

On entering the courtyard, visitors are immediately captured by the beauty of the thick thatched roof which extends all the way down to the ground. The entrance to the Muzibu-Azaala-Mpanga is through a low, wide arch flanked on both sides by richly woven reeds.

The inside of the house is adorned with power insignias such as drums, spears, shields, medals, and photographs of the Kabakas buried there. The floor is covered with a thick layer of lemongrass and palm leaves mats. The whole structure is supported by gigantic straight wooden poles wrapped in barkcloth.

This creates a striking impression of harmony and power. Its massive scale can be seen in its external diameter of 31 meters and an internal height of 7.5 meters.

The physical features of the Kasubi Tombs represent only a fraction of the traditional life there. The Kasubi tombs and the entire site environment carry strong spiritual and social significance while the architecture itself carries meanings related to the Ganda traditions.

The rich decorative features, invested with spiritual values, reflect the interaction between nature and culture, between the spirits and the living people. One example is the 52 rings of spear grass supporting the great roof. Their number relates to the 52 Ganda clans.

The hidden part inside the great house, as stated earlier, is known as the “sacred forest” or kibira. It is a sacred area where the Kabakas spirits are believed to reside. Only the widows of the Kabakas have access to the sacred forest.

Apart from the Royal burial ceremonies, other traditional rituals are carried out throughout the year.

They include among others the new moon ceremony and the consultation of the mediums. But the main spiritual life is not visible to the ordinary visitor as many ceremonies are performed secretly inside the buildings. This aspect of the Ganda tradition is well known by the population and it is still respected.

The Baganda also observe the myths concerning the origin of death. People believe that every person’s death has a spiritual origin. At Kasubi, when a King or a member of his family dies, they immediately enthrone a successor after the burial and perform rituals to appease the spirits.

Animals are sacrificed and gifts of various kinds including money are deposited in the numerous shrines. Kasubi is also visited by a wide range of Baganda medicine men and women who consult the Kings’ spirits to obtain blessings in their trade.

The grass is prepared in conical bundles which are simply laid onto the roof structure without being tied, except for the first layers at the bottom.

When one of these bundles is rotten, it can simply be pulled out and replaced. This interesting technique makes the huge maintenance task of the thatched roofs much easier.

The thatching is carried out by the members of the Ngeye clan (colobus monkey clan), who are the only people allowed to do the work. The thatching skills are passed down from the elders of the clan to younger members during an apprenticeship.

This practice is still very much alive with younger members of the clan coming up voluntarily to take on this important responsibility at the site. Special customs are observed when fixing a roof.

The widows, for example, are not allowed to enter the building when it is being thatched. It is believed that their presence would cause leakage. Pregnant women are also not allowed inside the building during renovation.

In addition, thatchers are not supposed to have sexual intercourse during the thatching period. The same custom is observed by the decorators of the poles, who belong to the leopard clan.

Barkcloth is a fabric made from the soft bark of the fig tree (ficus natalensis), and is one of the fascinating skills of the Baganda. This barkcloth has strong ritual importance to the people of Uganda.

To make this soft and resistant fabric, the outer bark of the tree is carefully removed and then alternately soaked and beaten with a grooved wooden mallet, until the fibers become flexible. The bark then re-grows and can be harvested again a year later.

Planning to visit the Kasubi tombs? We recommend the 1 Day Kampala City Tour which will take you to see tombs on the Kasubi hill and other places within Kampala.

Getting to Kasubi Tombs?

At the Nakulabye roundabout, go right onto Hoima Road, drive 1 kilometer and turn left to go up the Kasubi Hill.

At the top of the hill, turn left onto Masiro Road and follow it to the entrance of Kasubi Tombs, which is marked by a thatched hut. The trip is approximately 15 minutes from Kampala.