Kampala city is the capital and largest city of Uganda with a population of around 2.5 million people. The city is located close to the shores of Lake Victoria. Surrounding Kampala is the rapidly growing Wakiso District.

Kampala has several faces. There’s the impossibly chaotic jam of central Kampala, its streets thronging with shoppers, hawkers, and the most mind-bogglingly packed bus and taxi parks you’re ever likely to see.

As you head up Nakasero Hill, you quickly hit Kampala’s most expensive hotels and the urban core fades into something of a garden city. Here you’ll find many of the embassies and government buildings, as well as exclusive residential zones. It’s also home to swanky restaurants and bars, popular with expats.

The city grew as the capital of the Buganda kingdom, from which several buildings survive, including the Kasubi Tombs (built in 1881), the Lubiri Palace, the Buganda Parliament, and the Buganda Court of Justice.

Following the 1962 independence, Milton Obote became president of Uganda and held the position until 1971, when former sergeant Idi Amin defeated his government in a military coup.

The city has since then been rebuilt with the construction of new hotels, banks, shopping malls, educational institutions, and hospitals and the improvement of war-torn buildings and infrastructure.

Traditionally, Kampala was a city of seven hills, but over time it has come to have a lot more. 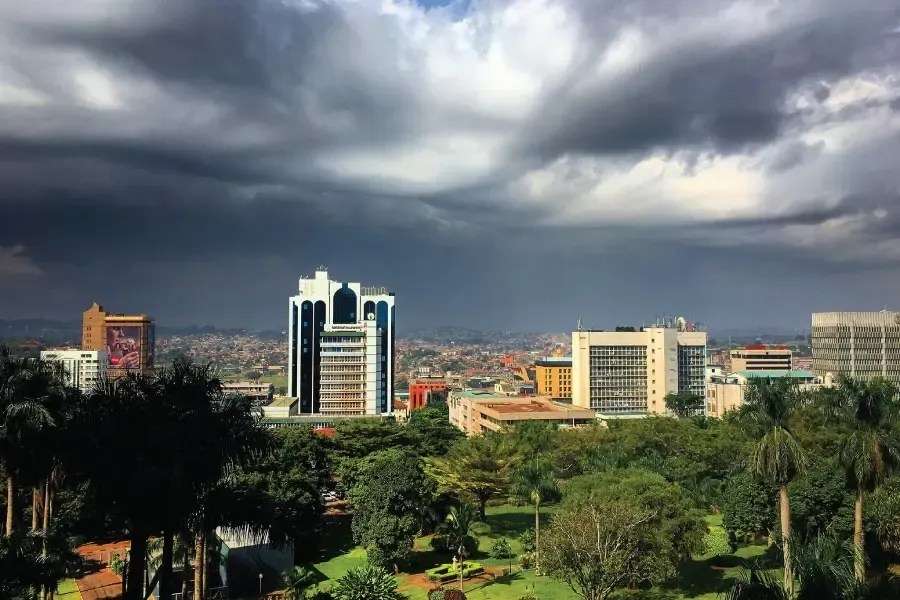 Areas of Interest in Kampala city

Located just 15 kilometers east of Kampala off Jinja Road, Namugongo was formerly a place of execution for all people who committed grave offenses in the kingdom of Buganda.

It is here that 14 of the 22 Uganda Martyrs offered their life to Christ (burnt alive), on the orders of King Mwanga in 1886, having refused to denounce their Christian faith.

The Shrine is well known for its beautiful and unique interior and exterior, but it is especially notable for its shape and architectural plan: the 22 copper pillars-over 100 feet long that support the shrine built in the form of an African hut and its wooden doors that depict the history of the Martyrs. The Shrine has a capacity of 1000 seats arranged in a circular form.

The construction of the Uganda Martyrs’ Shrine began in 1967. It was completed and formally opened by the special Papal envoy, His Eminence Sergio Cardinal Pignedoli on 3rd June 1975.

When Pope John Paul II made a pilgrimage to Namugongo on February 7, 1993, during his six-day visit to Uganda (5th -10th February 1993), he elevated the Shrine to a rank of a Minor Basilica.

Every year on the 3rd of June, people flock in tens and thousands to honor and pray to God through the intercession of the twenty-two Uganda Martyrs and others come daily.

At the Nakulabye roundabout, go right onto Hoima Road, drive 1 kilometer and turn left to go up the Kasubi Hill. At the top of the hill, turn left onto Masiro Road and follow it to the entrance of Kasubi Tombs, which is marked by a thatched hut. The trip is approximately 15 minutes from Kampala.

Saint Mary’s Cathedral Rubaga, commonly referred to as Rubaga Cathedral, is the parent cathedral of the Roman Catholic Archdiocese of Kampala, the oldest Roman Catholic diocese in Uganda. It is the home church of the Archbishop of Kampala.

The Cathedral is located on Lubaga Hill, in Lubaga Division, in the western part of Kampala city, the capital of Uganda, and the largest city in that East African country. Lubaga is located approximately 3 kilometers, west of the central business district of Kampala.

Situated on Mengo hill alongside Lubaga road within Kampala – Uganda, this is the main palace in the Kingdom of Buganda, full of exciting scenes and art galleries.

The Kabaka’s main palace in Bulange, Mengo is more than a fine, historical architecture that welcomes you to the pinnacle of Bulange hill. The majestic colonial powerhouse provides a rich history of one of Uganda’s oldest kingdoms– Buganda.

The Independence Monument is in many ways one of the most important pieces of Uganda’s heritage.

Located along Speke road in Kampala city, just opposite Standard Chartered bank, the construction of the Independence Monument was funded by the British Colonial government in the days leading up to Uganda’s first independence celebrations on October 9, 1962.

Depicting a man unwrapping his child and raising it to touch the sky, the towering sculpture signifies a newborn country let free from the bondage of colonization.

The Uganda National Mosque is a mosque located at Kampala Hill in the Old Kampala area of Kampala, Uganda. Completed in 2006, it seats up to 15,000 worshipers and can hold another 1,100 in the gallery, while the terrace will cater for another 3,500.

Colonel Muammar Gaddafi of Libya commissioned the mosque as a gift to Uganda, and for the benefit of the Muslim population. Uganda has many mosques but this one is a skyscraper mosque. The completed mosque was opened officially in June 2007 under the name Gaddafi National Mosque and housed the head offices of the Uganda Muslim Supreme Council.

It was renamed “Uganda National Mosque” in 2013 following the death of Colonel Gaddafi as the new Libyan administration was “reluctant to rehabilitate the mosque under the old name.”

The Uganda Museum is a museum in Kampala, Uganda, which displays and exhibits ethnological, natural-historical, and traditional life collections of Uganda’s cultural heritage.

This is East Africa’s oldest museum and it was founded in 1908 after Governor George Wilson called for “all articles of interest” on Uganda to be procured. Also among the collections in the Uganda Museum are playable musical instruments, hunting equipment, weaponry, archaeology, and entomology.

The Baha’i temple or Baha’i House of worship in Kampala is located on Kikaya hill on Gayaza road just 7km from the city center.

It’s the only place where you can get to learn about the Baha’i faith in Uganda, observe nature, and enjoy the beautiful scenery of Kampala city as you relax in an amazing environment. The beautiful grounds offer a wide range of photographic opportunities however one is asked to respect the Temple interior and not to take photos within.

Completed in January 1961, the Baha’i Temple has since received hundreds of visitors from all over the world. The Baha’i Temple is open daily between 9:00 am to 5:00 pm with a Sunday Service at 10:30 am.

The place where Bahai temple is located is also a famous birding spot for most tourists as over 50 species of birds can be found there.