Budongo Central Forest Reserve is located near Murchison Falls National Park and is home to chimpanzees and other primates as well as many species of birds.

An exceptionally large mahogany tree is about 80 meters tall or more and 20 meters wide. The Budongo Royal Mile also found in Budongo Forest is situated at the edge of the Albertine Rift, attached to Murchison Falls National Park in the south.

The Budongo Royal Mile is a perfect birding spot with a number of west & central African bird species and a variety of sought-after key species.

The area is composed mainly of a moist, medium-altitude, semi-deciduous forest, with patches of savanna and woodland. It covers a gently rolling landscape, sloping down to the East African Rift. Four streams, Waisoke, Sonso, Kamirambwa, and Siba, drain the forest and flow into Lake Albert.

Annual rainfall in the area is between 1200 and 2200 mm, the rainy season is from March-May and again from September – to November, and the dry season is December – to February.

The nearest town is Masindi, and much of the land around the forest is given over to crops, dwellings, and villages, placing continuous pressure on the forest margins, and leading to exploitation for building materials and bushmeat, the snares set by poachers causing mutilation of the chimpanzees and other animals.

The mahogany trees that still remain are cut and removed by itinerant pit sawyers. 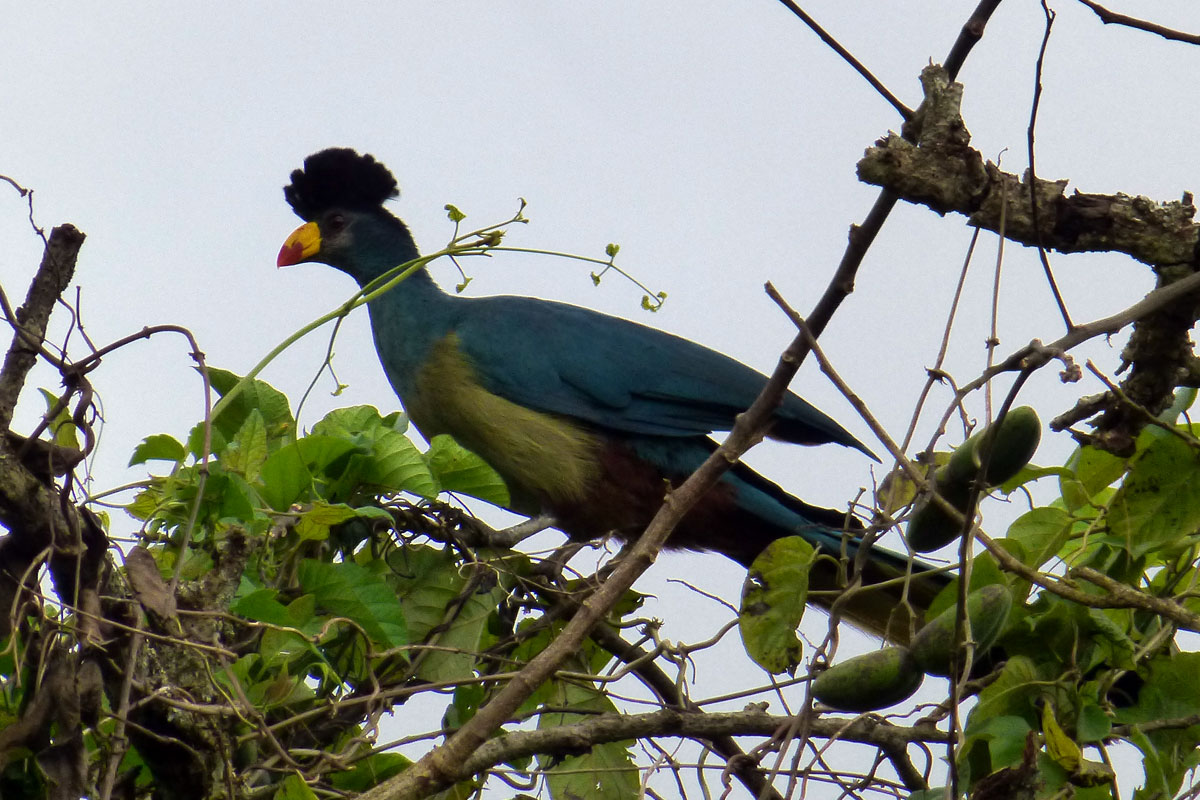 Recorded from Budongo are more than 360 bird species, some 290 butterflies, 130 moths, 465 trees, and 24 mammals, of which 9 are primates. Chimpanzee tracking has become an activity popular with eco-tourists, necessitating behavioral guidelines for visitors in order to avoid undue disturbance of both animals and forests.

Trails have been cut crisscrossing the forest, initially to ease access for research workers and since then used by eco-tourists, forest animals, and poachers.

Vernon Reynolds first studied chimpanzees in this forest in 1962, writing a book about the forest and its chimpanzees in 1965. He was one of a trio of pioneer field researchers – the others being Jane Goodall and Adriaan Kortlandt.

During the 1970s and 1980s, civil war raged in the country, with an accompanying breakdown of law and order. Chimpanzee mothers were shot and the infants were taken from the forest and smuggled to collectors in Asia, Europe and America.

Reynolds returned to Uganda in 1990 to determine whether a viable population of chimpanzees still existed in Budongo. By 1995 some fifty individuals had been identified, and this figure remained constant until 2000 when the numbers started rising, thought to be due to an influx of chimpanzees from other areas.

Here are some of the birds to look out for in Budongo Central Forest Reserve.

Getting to Budongo Forest

Budongo Forest is located around 300 kilometers northwest of Kampala. Budongo can easily be accessed by either road or air travel. Driving from Kampala to Budongo Forest Reserve takes a total of about 4 hours.

Alternatively, one can take a domestic flight from Entebbe to Murchison Falls National Park which is a shorter drive to Budongo Central Forest Reserve. Since Budongo is often visited along with the nearby and very popular Murchison Falls N.P, getting there is quite easy and straightforward.Best time to visit Budongo Forest

Where to Stay in Budongo

Because of its close proximity to Murchison Falls National Park, the accommodation options and infrastructure is plentiful. While the lodges in Budongo Forest are limited, the nearby town of Masindi has a wide variety of budget-friendly options.