The Amabere Ga Nyina Mwiru Caves are a historic site believed to be the birthplace of the founding King of the Bachwezi.

Located 5km west of Fort portal, the main cave is small and supported by pillar-like formations of stalactites and stalagmites. Standing alongside are the moss-covered rocks behind a small waterfall.

Lake Kigere is a Crater Lake located northeast of the caves and it will take you 10 to 15 minutes to hike there. The Amabere Ga Nyina Mwiru meaning ‘Breasts of Nyinamwiru’ were named after the stalactites that form in the caves.

They resemble the breasts of a woman, though some would say it looks more like a cow’s udder.

There are a total of more than three dozen crater lakes found in Toro scattered across 10 kilometers and they run up to the western boundary of Kibale. 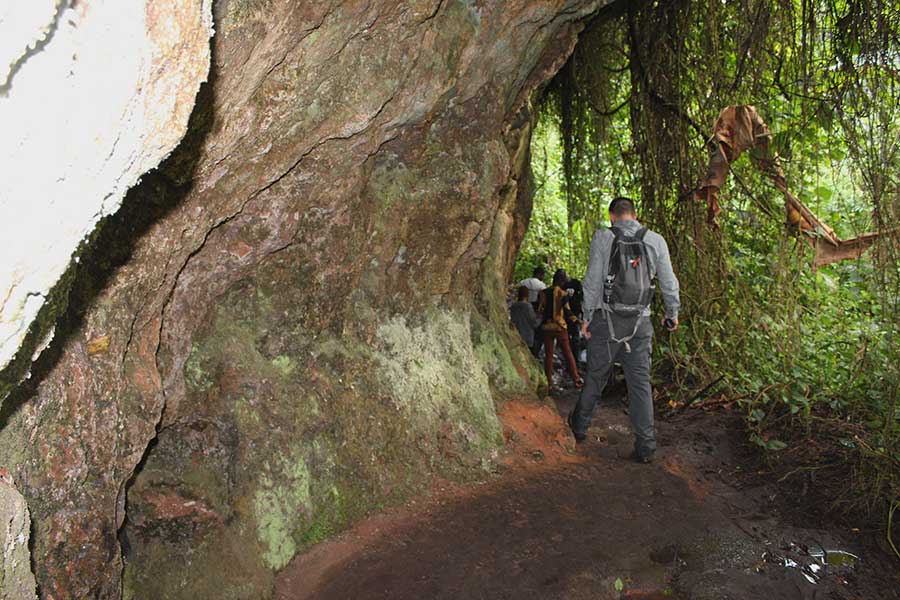 The crater lake area has fertile soils and is dominated by lush cultivation. Numerous species of birds, monkeys, butterflies, and vegetation can be found here.

One of the most spectacular craters is Lake Kyaninga located north of Fort portal.

This is quite an interesting cultural tour because you will be guided through the history of the Bachwezi dynasty that lived here in the 14th Century.

After that, you can go for a ‘real hike’ to see over 5 crater lakes. This hike can either be done in the morning or afternoon and takes between 3 and 5 hours.

The weather around Fort Portal is sometimes rainy so a certain level of fitness and appropriate dressing code would be very important. This tour is very interesting and informative to anyone coming to Fort portal, Uganda.

Nearby Places to Visit

Fort portal town lies within the heart of Toro kingdom – Uganda’s youngest traditional Kingdom. The Toro Palace is a circular monolith that was constructed in the 1960s and is a center of attraction to many.

It’s situated on Kabarole hill, with panoramic views over the town and the green countryside.

Known as the Primate capital, Kibale National Park boasts the highest diversity and density of primates in Africa. Kibale forest is one of Uganda’s most magnificent rainforests with more than 350 tree species.

Chimpanzee tracking is the most common activity, others include birding and nature walks. Located about 26 km from fort portal town, you can visit the forest park any time of the year.

An afternoon swamp walk in Bigodi wetland sanctuary will reward you with amazing birdlife, especially the Rwenzori Blue Turaco.

The nature walks are organized by KAFRED, a community-based organization and they are very informative.